We recently made our debut at a UK trade fair, appearing at last week’s CIPD exhibition in Manchester. The event was a chance for companies to showcase their products to over 4,000 HR professionals looking for insights and solutions to their HR problems. As this was our first conference we were looking forward to the experience, but were also unsure as to what to expect! From our ‘first timers’ perspective, this is what we found out...

Travel plans
Mancunian Way in the centre of the city is still really busy at 6.30pm and it took 35minutes to drive the final  mile.  Next time we’ll aim to arrive midday or later in the evening to avoid all the traffic. Fortunately, the car park under Manchester Central is massive.  Top tip: When you’re the one who has all the kit in your car, park nearer to the exhibition hall than I did...

Early Mornings
The first hour is dead.  Punters (aka conference delegates) circle the show sizing up the exhibits as if circling the wagons in an old western, before moving in for the kill. There is a definite ebb and flow of delegates in line with the conference program – best to check this at the start of each day.  Entry to the exhibition is free, so a lot of new people arrive just for day 2.

Sales technique
Some stall holders (aka Exhibitors) were much keener on ‘telling’ rather than selling.   Seemingly, the more senior the exhibitor, the more they seemed determined to reel off every feature their product or service had to offer.  We saw shell shocked delegates staggering away from stands 20 minutes after simply asking where the coffee bar was.  Also ‘booth babes’ aren't dead, but they are clearly an endangered species.

Stand Design
We decided to go against the advice of the suppliers of fancy giveaways, builders of stands that looked like pirate ships, giant video walls, and magicians and went with a basic stand-  a real Yorkshire budgeting methodology.   And you know what, I honestly don’t think it made much difference at all.  As with many things, its location that counts – that and a friendly approach. At the end of the show, the speed with which some of the obviously more experienced exhibitors could pack up and go home had to be seen to be believed. 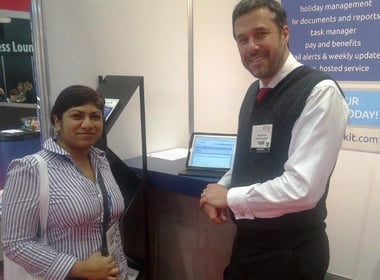 Self Promotion
Some people will happily walk past your clearly labelled stand.  On asking if they might just, possibly be interested in your product, they turn out to be really keen, having actually been sent by their boss to look for a product just like yours.  A pro active approach really does work.

Refreshment
The show organisers kindly provides all its exhibitors with free drinks vouchers.  However 3 vouchers divided by 2 people doth trouble make. The bars of Manchester were of a high standard and we’d recommend the Rajdoot Indian restaurant in Albert Square.

Top 5 items we wished we’d had

A vase for our flowers

More time to look around other stands

More breakfast – no time for lunch

A popcorn machine - why not?